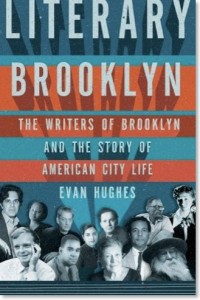 The BWRC is proud to present the first in its series of Breakfast Talks, featuring Evan Hughes, the author of Literary Brooklyn: The Writers of Brooklyn and the Story of American City Life. Hughes will be discussing the relationship that several of the writers he examines in his book–Walt Whitman, Hart Crane, Hubert Selbey Jr., Alfred Kazin, etc.–had with the borough’s waterfront. The talk will take place on Friday, November 18, at 8:30 am, in City Tech’s beautiful new event space, Namm 119.

The New York Times Book Review called Hughes’s work “lively,” noting that “Urban history and literary history often brush up against each other to profound effect,” while Luc Sante, renowned critic and author of Low Life, summed it up in this way:  “They say Brooklyn is the literary navel of the nation right now, but after reading Evan Hughes’s book you’ll ask, ‘Wasn’t it always?’ It’s a richly detailed, beautifully written history.”

The event is free and open to the general public, students, and faculty. Coffee and a light breakfast will be served.