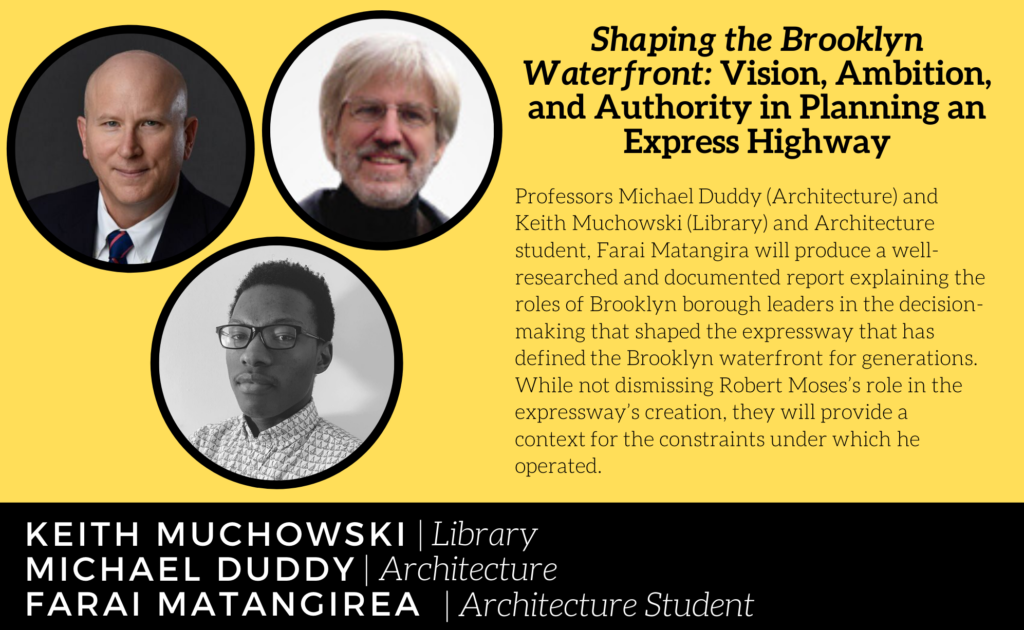 The accelerated growth and prosperity of Brooklyn in the first two decades of the new millennium is clearly evident. A soaring skyline, rehabilitated residential neighborhoods, young entrepreneurs and a bourgeoning art scene characterize the emerging city. Perhaps one of the most visible and certainly one of the greatest prides of the borough is the creation of the Brooklyn Bridge Park, eighty-five acres of reclaimed industrial piers and brownfields along the waterfront that bracket the Brooklyn Bridge from Jay Street in Dumbo to Atlantic Avenue at the edge of the Heights.  But accompanying this growth and change is displacement: families who have lived in neighborhoods for generations being forced to leave because they can no longer afford the rents and the services that have replaced those with which they grew up and relied.  The history of the Brooklyn waterfront is in many ways a history of separation, not one caused solely by economic prosperity or decline, but brought about by the building of a highway.  The fact that the fates of Brooklyn’s waterfront and the so-called “circumferential highway” consisting of the Belt Parkway, Gowanus Expressway, and the Brooklyn-Queens Expressway (BQE) are inextricably intertwined is indisputable.

This study documents the history of the planning of the circumferential highway that extends from the Queens borough line at Howard Beach to the Brooklyn Navy Yard, before it continues north on an inland route through Williamsburg and Greenpoint to reach the Kosciusko Bridge into Queens. This study is intentionally restricted to the areas where the highway directly interfaces with the East River and the upper and lower New York Bays, and addresses the fundamental question of why the highway took the route that it did. It interrogates its planning from three perspectives: (1) engineering challenges, (2) financial expedience, and (3) physical and social impacts.  But of course, central to any investigation of public improvements looms the forces of economic necessity buttressed by the political determination to get it done despite the obstacles. There were many players involved in realizing the circumferential highway, and typically, for better or worse, the usual suspect is the “Master Builder” Robert Moses.  But as will be revealed, the situation is much more complex, and the roles of the mayor, the comptroller, and borough presidents Raymond V. Ingersoll (1934-1940) and John Cashmore (1940-1961) cannot be discounted. Quite the contrary, as elected officials it was incumbent on all of them to accommodate the desires of their supporters and the public, suggesting that the planning and construction of the highway actually conformed to the will of the people. This is the story of an infrastructure project that transformed the face of Brooklyn and its relationship to its waterfront and of the people whose vision, ambition, and authority made it happen.

Michael Duddy is an assistant professor of architecture at City Tech.  Before coming to City Tech, he cofounded an architecture practice in Shanghai that continues to design large mixed-use projects in East Asia. His academic work covers two fields, one of which is related to the intersection of architecture with the fields of epistemology, phenomenology, and mathematics.  His writings include “Roaming Point Perspective: A Dynamic Interpretation of the Visual Refinements of the Greek Doric Temple,” Nexus Network Journal (2008); “The Ends of Reason: Towards an Understanding of the Architectonic,” Journal of Aesthetics and Phenomenology (2018), and “Logical Accidents and the Problem of the Inside Corner,” Nexus Journal of Architecture and Mathematics (2019).  Professor Duddy’s other interests involve researching the history of American urbanism, and he is currently working on a book on public architecture and urban design in downtown Brooklyn.

Keith Muchowski is an associate professor and librarian in City Tech’s Ursula C. Schwerin Library. He has been co-teaching Learning Places: Understanding the City since 2016 and is especially interested in the history, growth, and evolution of New York. He recently completed a manuscript about the role that prominent New Yorkers such as Theodore Roosevelt Sr., Frederick Law Olmsted, Louisa Lee Schuyler, and others played in helping the Lincoln Administration prosecute the American Civil War. In the years after the war’s end, these philanthropists worked to create such institutions as the Metropolitan Museum of Art, American Museum of Natural History, and Brooklyn’s Prospect Park, among other institutions,. Professor Muchowski is interested in New York State’s role in American affairs and the role that such figures as Alfred E. Smith, Robert Moses. Robert F. Wagner Sr., Fiorello H. La Guardia, and Franklin D. Roosevelt played in local, state, and national politics as the United States grew in international prominence in the twentieth century.

Farai Matangira is a third-year City Tech architect student who believes that the design of the built environment is key to understanding human nature. This has aroused his curiosity on how ideas of a habitable space are translated into a functional building. His admiration for behavioral science and its link to architecture is expressed through his design projects as a budding architecture student. Having lived in three different countries, he continues to explore more about architecture not only from a design and construction perspective, but also from its relationship to societal issues in cross-cultural set-ups. He has interned at the Department of Citywide Administrative Services (DCAS) as part of CUNY’s Service Corps program, where he worked on projects that managed New York City’s public property portfolio. The program also included projects that addressed the City’s socio-economic development as well as its promotion of civic engagement. He recently became student editor for City Tech’s architectural department journal, TECHNE, where he coordinates with students and the faculty on various architectural works