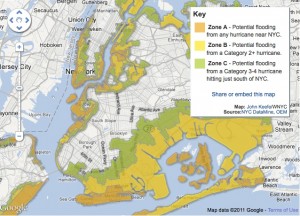 Whether or not the media overhyped Hurricane/Tropical Storm Irene (the hype was indeed justified for the once-in-a-generation flooding event in upstate New York and Vermont), the storm did bring New York City’s planning for potential flooding into the broader public consciousness, and perhaps helped to foster a new kind of awareness of Brooklyn’s intimate relationship with its watery perimeter. The map above, created by WNYC’s web guru John Keefe (you can find the original interactive, “zoomable” version here), vividly illustrates Zones A, B, and C, areas of varying threat gradation from hurricane storm surge. Zone A, the area most likely to flood with storm surge from a hurricane of any intensity, includes the recently developed “Gold Coast” of Greenpoint and Williamsburg, as well as all of Red Hook and Coney Island, two other “hot zones” of current and future development. (This zone was under a mandatory evacuation order; it would be interesting to know how many denizens of the new high-rises complied.) As climate scientists and meteorologists almost universally concur that we are entering a new phase of more violent weather events and rising seas, could Irene serve as an urgent reminder that future waterfront development needs to take these contingencies seriously? And might the city’s evacuation zoning have some sort of impact on the real estate market? Or will these concerns quickly evaporate as Irene’s media cycle expires?

Irene prompted an even more granular analysis of storm surge effects in the NYC metro area and Long Island by Steven Romalewski, the Director of the CUNY Mapping Service, which you can find at his blog, Spatiality. His August 30 entry is password protected, but there are some other great resources here.