BWRC hosted its ninth annual conference, Living in Brooklyn: Housing along the Brooklyn Waterfront on April 12, 2019, at City Tech’s new academic complex. The conference this year focused on two of the greatest challenges facing housing along the waterfront: gentrification and climate change. Over 200 community members, activists, students, scholars, and agency officials registered for the event.

The morning began with an introduction of the history of Brooklyn’s waterfront, featuring Dr. Kurt Schlichting of Fairfield State University. Dr. Schlichting, a BWRC Research Fellow, contributed original research and a white paper, “Housing along the Brooklyn Waterfront: A Story of Shipping, Industry and Immigrants.” The paper, which is also included in our conference program, covers the dramatic changes the waterfront has undergone since the eighteenth century. Once among the largest and busiest ports in the world, Brooklyn’s waterfront was also home to a series of immigrant enclaves over the years, with communities hailing from Germany, Ireland, Norway, Italy, and Eastern Europe dotting the neighborhoods behind the ports. Deindustrialization, suburbanization, and redlining practices radically transformed the waterfront in the postwar era, and the housing stock and working waterfront fell into decline. Over the last thirty years, however, the Brooklyn waterfront has experienced a resurgence in population and an economic transformation. Rather than innovations in manufacturing and shipping, the greatest challenges for residents in these neighborhoods are gentrification and displacement.

Following the historical overview, Jessica Yager, Vice President of Policy & Planning at WIN (Women In Need) provided the audience with the framework and context of housing affordability along the Brooklyn waterfront. Yager introduced each neighborhood, from Williamsburg to Coney Island, DUMBO to East New York, noting their similarities (housing has gotten less affordable in every neighborhood along the waterfront) and their differences (Coney Island has over 40,000 housing units in the 100-year flood plain, compared to 48 in East New York).

The first panel, moderated by Dr. Nicholas Bloom of the New York Institute of Technology, featured speakers from the New York City Department of Housing Preservation & Development (HPD) and the Department of City Planning (DCP). John Mangin, Senior Counsel at DCP, gave a brief history of subsidized and affordable housing policies in New York, noting the role that zoning designations can play in activating land for residential development. Fabiana Meacham, Chief of Staff at HPD, introduced the Mayor’s affordable housing plan, which aims to build and preserve 300,000 affordable homes by 2026. Brendan McBride (Associate Commissioner for New Construction) and Rona Reodica (Assistant Commissioner for Building & Land Development Services), both from HPD, detailed the various financing instruments available for New York to build affordable housing and the design guidelines that shape new construction. Dr. Alex Schwartz, Professor of Urban Policy at the New School, wrapped up the panel by pointing out the tremendous budget gap facing public and subsidized housing and the limitations this poses for policymakers.

During lunch, Professor Emeritus Tom Angotti of CUNY delivered a rejoinder to the morning’s panels, “The Future of the Brooklyn Waterfront: Affordability and Resilience Are Not Enough.” Dr. Angotti emphasized that community and social resilience, cultivated through social justice activism, are fundamental steps toward climate resilience and housing affordability. Without robust community organizing and activism, neighborhood planning cannot preserve affordability and equity.

The lunch address was a great segue into the third panel, “Preserving and Expanding Housing Affordability through Organizing.” Oksana Mironova of the Community Service Society of New York moderated this panel, which featured organizers and planners from the Brooklyn Waterfront. Michael Higgins, Jr., lead organizer for Families United for Racial and Economic Equality (FUREE) discussed the challenges of balancing the various needs of the Gowanus community during the rezoning, including NYCHA repairs, industrial preservation, affordable housing development, and EPA remediation. Tevina Willis of the Red Hook Initiative discussed her efforts to bring policy attention and government investment to the Red Hook houses, noting that “when you speak of affordable housing, public housing is always the last last note on the last page. My work is to get public housing on the first page of these reports.” Renae Widdison, Director of Land Use and Planning for Council District 38 in Brooklyn, outlined her office’s approach to new economic development initiatives: “How will this benefit the people in this community?” The upcoming vote on New York’s rent laws are a huge issue in the affordable housing world this year, and Cea Weaver, campaign coordinator for the Upstate/Downstate Housing Alliance, offered critical insights about the role of real estate interests in housing access, the cycles of investment and gentrification that transform communities, and how critical organizing is to preserving and promoting equity across the city.

The final panel, “Housing Resilience: Strategies for Climate Readiness,” was moderated by City Tech professor of architecture Illya Azaroff. What are the primary challenges for the future of housing along the Brooklyn Waterfront? Professor Azaroff pointed out that sea level rise could reach 108 inches over the next 80 years, flooding most of the low-lying areas of New York City and displacing 400,000 people. Architects and planners have already started thinking about these challenges, including Deborah Gans, Founder and Principal of GANS Studio. Gans described how she and her colleagues design for resiliency, whether through elevated home or native grass landscaping. Michele Moore, Director of Recovery and Resilience at NYCHA, outlined the devastation left by Hurricane Sandy in NYCHA buildings across the five boroughs and explained how new funding would upgrade and protect the homes of over 600,000 low-income residents. Homeowners in the flood areas face a completely different set of obstacles and challenges as sea levels continue to rise. Rachel Stein, Deputy Director of Sustainability and Resiliency at the Center for New York City Neighborhoods (CNYC) covered the various programs and strategies she and her colleagues pursue to assist homeowners, including flood insurance information, resiliency audits, backwater valve installations, and energy efficiency training. Dan Wiley wrapped up the presentations on this panel, discussing the roles federal funding and resources can play in designing resilient communities for the future.

The last panel introduced an important, albeit difficult, question: Should there be housing along the Brooklyn Waterfront, or is it time to move residents and resources inland? Michael Marrella, Director of Waterfront and Open Space Planning at DCP joined the panelists to broach this question and explore the many challenges and opportunities facing waterfront planning in the coming decades. The fundamental issue, noted Marrella, is that unequal wealth and resources across different neighborhoods will ultimately determine the impact of climate change on these neighborhoods.

BWRC Director Richard Hanley closed the conference with a few words, thanking participants and staff for their contributions. Many thanks also go out to Robin Michals and Jeremy Renner for generously photographing the conference. 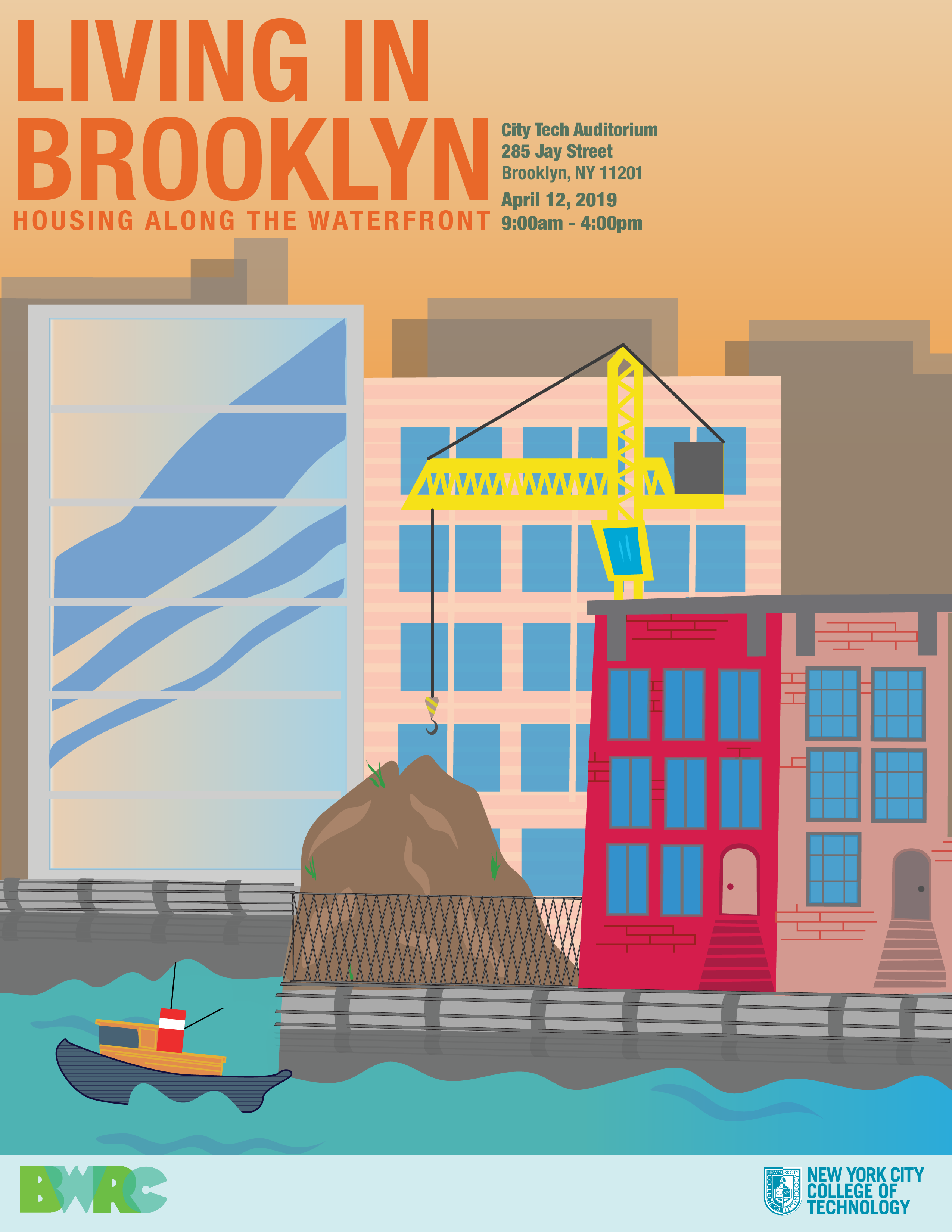