In May 2014, the artist Kara Walker installed a monumental piece of public art in the derelict Domino Sugar factory that was soon to be gutted and redeveloped into a mega project that was facilitated by a series of zoning changes in the neighborhoods of the Brooklyn waterfront. The short title of the Walker installation was “The Subtlety or the Marvelous Sugar Baby.” But the massive installation, dominated by a sphinx-like figure measuring 75 feet long and 35 feet high, was not subtle. It was a work of art that spoke to the history of an industry, located along the Brooklyn waterfront, that was built on the backs of black bodies and that was central in the slave trade.

Walker’s work is just one example of the many ways that the Brooklyn waterfront contains the narrative of our country’s very fraught racial history: from the industries of sugar and coffee that were complicit in slavery, through the racial red lining in the middle of the last century, to the re-zoning battles of the early 2000s which caused massive displacement, to the loss of living wage manufacturing jobs along the waterfront, to the location of environmentally dangerous facilities in neighborhoods along the waterfront, to the location of public housing in areas vulnerable to the forces of climate change and sea-level rise, to the current battles against gentrification being waged by committed community groups.

Throughout, we have seen Brooklyn’s waterfront neighborhoods of color exercising their power to organize and create more just communities, and by extension, a more just city. There have been many inspiring efforts of unity and community in the face of injustice and brutality. Perhaps one of the most powerful and poignant instances happened yesterday in Brooklyn’s Cadman Plaza, one of the grandest routes to the waterfront.

Terrence Floyd, George Floyd’s younger brother and Brooklyn resident, spoke before a crowd of thousands who were protesting the murder of his older brother.  As he stood before them, first choking up and unable to speak, the crowd started a chant, “You are not alone. You are not alone.”  And as the thousands of protesters, perhaps millions, across the country and the world, speak against the brutality of what we all witnessed and the brutality of the system of which it is a symbol, let us hope that this time, this time, they are correct when they shout to Terrence Floyd, “You are not alone.” 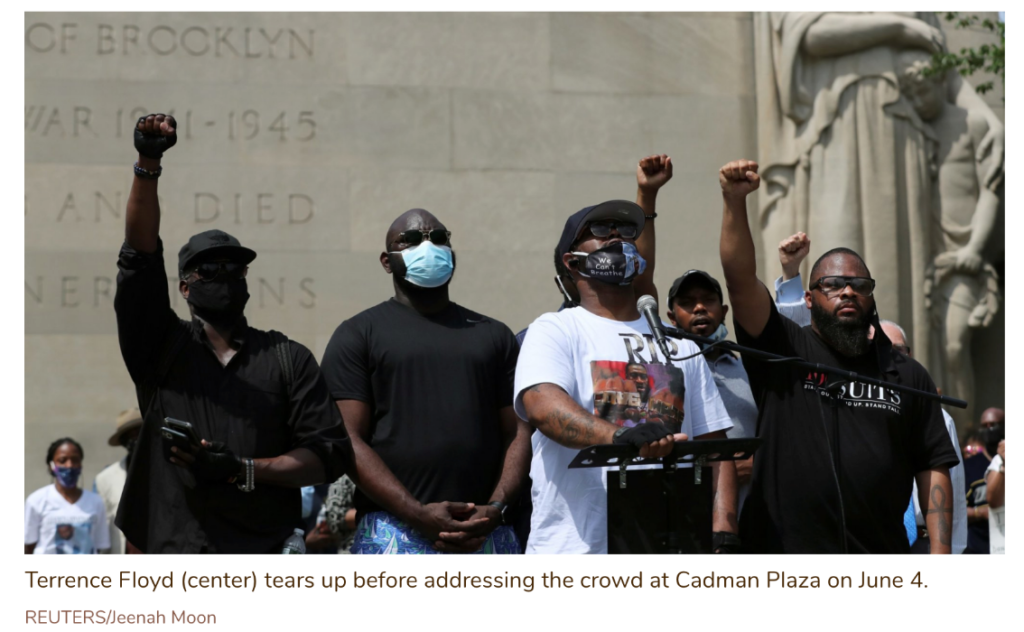