Citizen
Science
Investigations
on the Waterfront

Urban planner and citizen-scientist Eymund Diegel has used kites, helium-filled balloons, and inexpensive cameras for the aerial photography that has helped him chart the environmental history of the land and the people of his neighborhood along the Brooklyn waterfront.

Diegel is a board member of the Public Laboratory for Open Technology and Science (Public Lab), a loosely organized community that practices “civic science.” He will speak about some of his discoveries, the tools that were employed to make them, and the way these discoveries can be used to improve the environmental conditions of his Gowanus neighborhood. 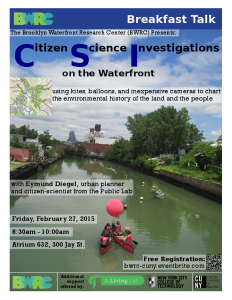