The BWRC held its first Breakfast Talk of the semester—and our first Breakfast Talk Panel conversation ever— on Friday, February 19th. We were pleased to present a panel of four highly-qualified experts on a topic that has been steadily garnering attention over the last decade: the rise of urban farming initiatives in Brooklyn and beyond. As our panelists made clear, some of the most innovative and exciting urban farming projects have been taking place in Brooklyn, often in waterfront areas where (until recently) under-utilized space was readily available.

As BWRC director Richard Hanley’s opening remarks reminded us, the challenge of providing nutritious and sustainably grown food to a growing urban population remains a global one. Our first speaker, Diana Mincyte, an assistant professor of sociology at City Tech, helped place Brooklyn’s current urban farming projects in this global context. Mincyte, who has written widely on the environmental and social justice dimensions of agro-food systems in Europe and the United States, contrasted the current vogue for urban farming in Brooklyn to cities in Eastern Europe. There, vegetable gardens and small-scale farming are commonplace, if not always viewed in the same favorable light that has generally accompanied the rise of urban farms in American cities.

Ben Flanner, the CEO, head farmer, and co-founder of Brooklyn Grange—currently the largest soil-based rooftop farming operation in the world—described some of the challenges inherent to urban farming generally as well as some of the specific hurdles his company has faced on its way to becoming one of the most successful rooftop farms in the country. As Flanner pointed out, structural and other building considerations, issues of space in densely-concentrated urban neighborhoods, and skyrocketing real estate costs all pose significant obstacles to the viability of urban farming in Brooklyn. That established, Flanner described his company’s successful mission to create a sustainable, environmentally-friendly, and profitable urban farm, as well as its recent efforts to branch out by providing landscape consulting, event hosting, adult education classes, and other educational and community ventures.

Mara Gittleman, the farm education manager at Kingsborough Community College, CUNY, spoke passionately and eloquently about her work integrating farming and gardening skills into the KCC curriculum. Describing the historical context that has shaped the built environment and affected the underprivileged communities where green spaces are most needed, Gittleman set up a contrast between the suddenly “buzzworthy” urban farms and the city’s community gardens, which are still largely unprotected and unrecognized by city authorities. In addition to her work as an educator, Gittleman continues her advocacy for community gardens as the founder and co-director of Farming Concrete and as a member of the board of directors of the NYC Community Garden Coalition.

Lastly, Mark Hellermann of City Tech’s Hospitality Management program spoke about his experience as an instructor of culinary arts and as the advisor to City Tech’s Garden Club. Underscoring the challenges posed by Brooklyn’s booming real estate market, Hellermann described the demise of the Garden Club’s former growing space on DeKalb Avenue, now replaced by a high-rise construction site (more felicitously, the Club now rents a plot from Brooklyn Grange). Hellermann also invited one of his students, Caroline Carreno to speak about her experiences both as a student in the Hospitality program and as the vice president of Garden Club.

A lively question-and-answer session followed the four speakers, as audience members contributed a wide variety of backgrounds and perspectives to the conversation. The Hospitality Program provided an array of pastries and delicious jams made with fruit grown by the Garden Club, providing a tasty illustration of some of the educational possibilities that urban farming initiatives can help foster. 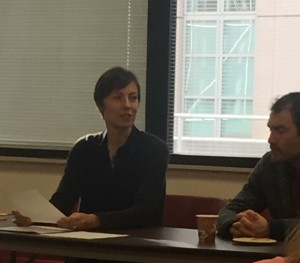 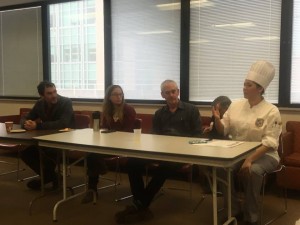 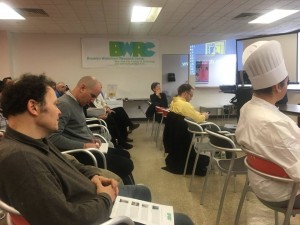 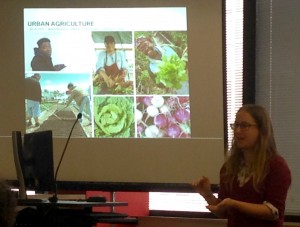