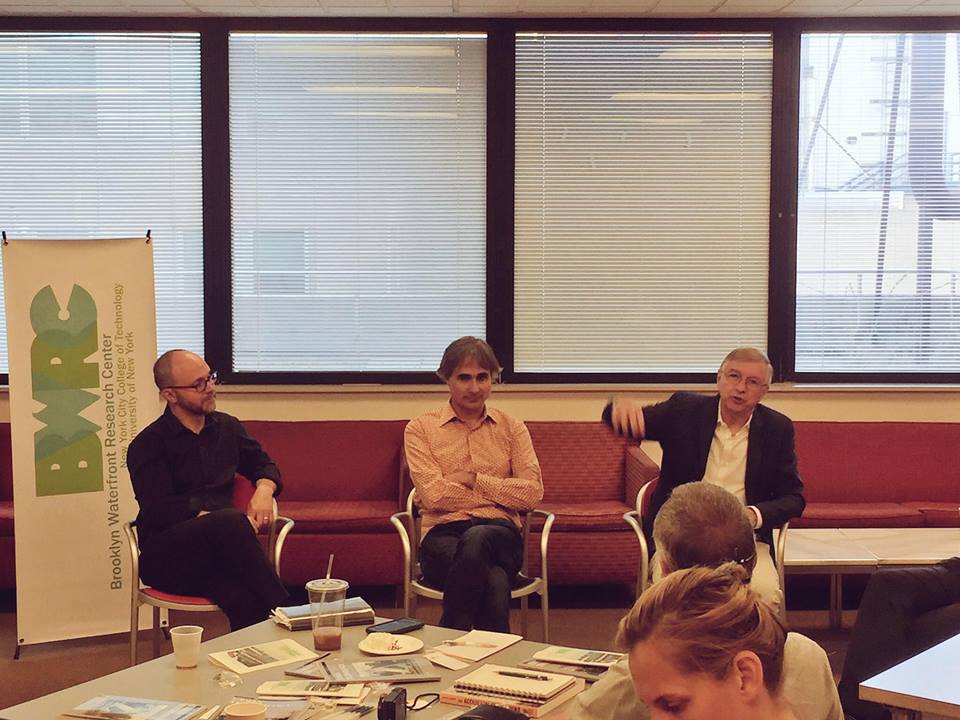 On Friday, September 22nd BWRC welcomed 25 Belgian urban planners to City Tech for a discussion about design initiatives along the Brooklyn waterfront. To kick-off our waterfront exploration, BWRC hosted two design scholars to share remarks on their respective Brooklyn-based projects.

Dan Campo (Ph.D. Director of the Graduate Program in City & Regional Planning at Morgan State University), shared a compelling overview of his research on improvisational park-making practices along the Brooklyn waterfront. Accidental Playground (2013), Campo’s ethnographic exploration of the Brooklyn Eastern Terminal District, surveys the methods used by waterfront residents as they fought to create and protect public space in the yet-to-be developed waterfront during the early 2000s. Campo’s presentation followed the thrust of his research, asking the crucial question: can contemporary urban residents continue to create organic uses of public space in the face of accelerating urban development? Campo closed by posing a direct question to the Belgian delegation – how can professional planners plan urban communities that allow for, and even encourage, democratic and improvisational uses?

Adam Lubinsky of WZY architecture firm presented about his integrated design work in the Brooklyn Tech Triangle. Lubinksy explained some of the unique characteristics of the Tech Triangle, namely the large number of new tech jobs that the city plans to integrate into the area, as well as the high-density of 12 universities (home to over 60,000 students). Specifically, WXY’s planning work on the area aims to re-think and re-tool previously underutilized spaces within the Triangle in an effort to absorb the anticipated increase in workers and students over the next five years. With a specific focus on The Strand Action Plan, the WXY firm has drawn up a plan to weave together currently disjointed public spaces throughout the Tech Triangle. By creating a connected corridor of public spaces, the Strand Action Plan aims to remediate some of negative spatial impacts of the Brooklyn Queens Expressway. The Brooklyn Tech Triangle project is a dynamic and complex project that takes its cues from multiple stakeholders. Currently, all feasibility studies are coordinated by the New York City Economic Development Corporation, while all public engagement efforts are spearheaded by private the interest group, the Downtown Brooklyn Partnership.

After our keynoters presented their waterfront research, the Belgian urban planners were given a guided tour of the Brooklyn Navy Yard by Andrew Gustafson, President of Turnstile Tours.

Overall, BWRC was thrilled to facilitate a day-long conversation with our international planning colleagues. Campo and Lubinsky’s presentations served as a fruitful catalyst for a day-long exploration into the possibilities for developing the waterfront’s built environment. BWRC looks forward to hosting similar planning delegations in the semesters to come!

BWRC offers a special thanks to delegation facilitator, Jens Aerts (Planner for Bureau for Urbanism), Dean Justin Vazquez-Poritz (Dean of the School of Arts and Sciences at New York City College of Technology) and the Rick Russo, Senior Vice-President and Chief Operating Officer of the Brooklyn Chamber of Commerce.