Join us for a virtual Breakfast Talk on the abolitionist history of downtown Brooklyn!

The recent landmarking of 227 Duffield Street is a signal not only of the significance of this one building but of the importance of all of Downtown Brooklyn in the history of the Abolitionist movement in the 1850s and 1860s, a location of the Suffragists in the 1890s, and a locale of African American cultural ferment during that time and further into the twentieth century.

The speakers will discuss the struggle to preserve 227 Duffield Street and place that struggle into a wider context of the history of African Americans in Downtown Brooklyn.

CITATION NOTE: Research and images for presentation on the “Struggle for Freedom and Equality: African American Life in Brooklyn, 1620-1865” taken from Prithi Kanakamedala “Brooklyn Abolitionists / In Pursuit of Freedom.” Learn more here: https://pursuitoffreedom.org 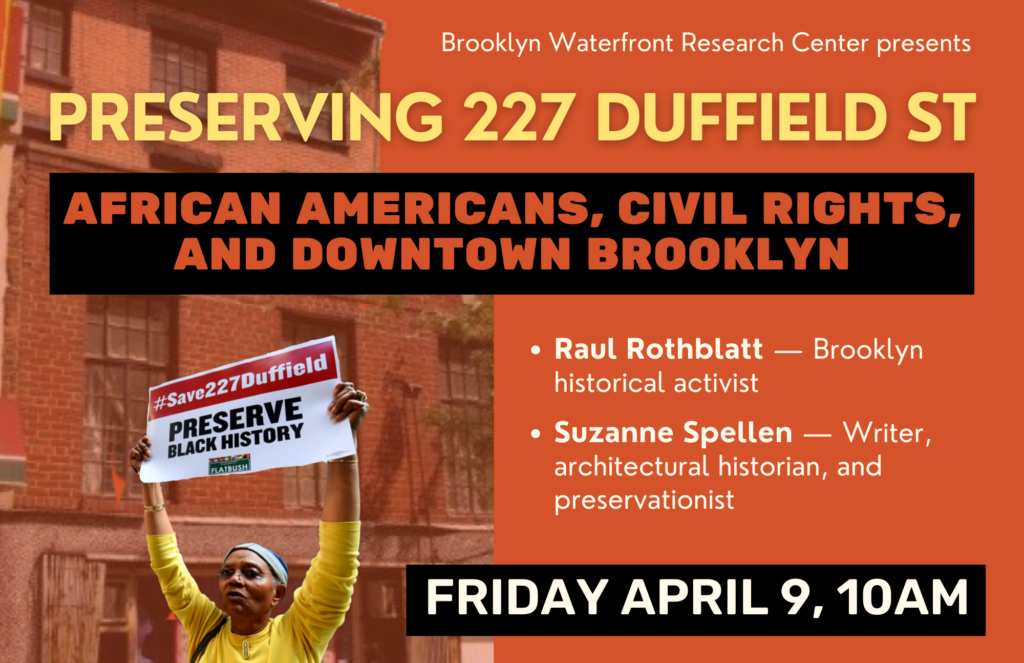 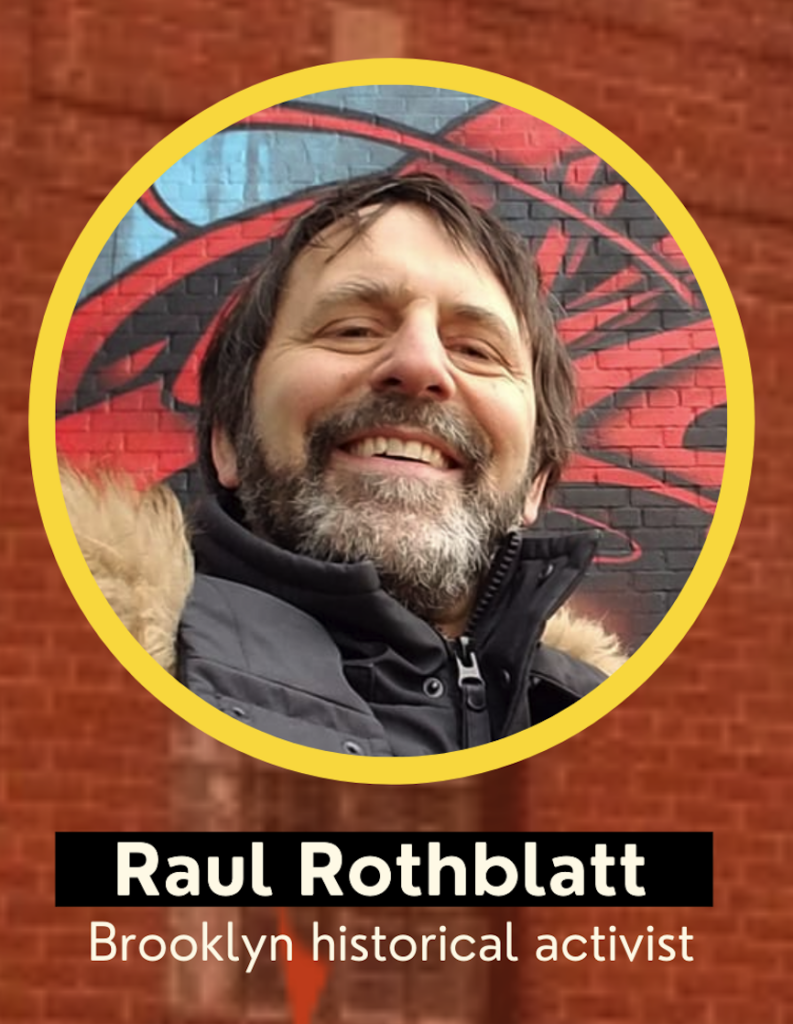 Raul Rothblatt has been dedicated to promoting Duffield Street’s unique and powerful history since he met Joy Monroe in 2004. Originally from San Francisco, he moved to Brooklyn in 1993 to complete his Masters in Musical Theater Composition at the Tisch School of Arts at NYU. He plays cello with Kakande, a West African griot-led band, and he plays bass with Életfa Hungarian folk.

As Co-President of the PS9 Parent Teacher Organization, he led the efforts to remove the school name of a slave owning family and replace it with Sarah Smith Garnet, the first African American woman principal in New York and co-founder of the first African American women’s suffrage club in the United States. He lives in Brooklyn and is the father of two children. He is currently Communications Director for NY City Council Member Robert E. Cornegy, Jr. 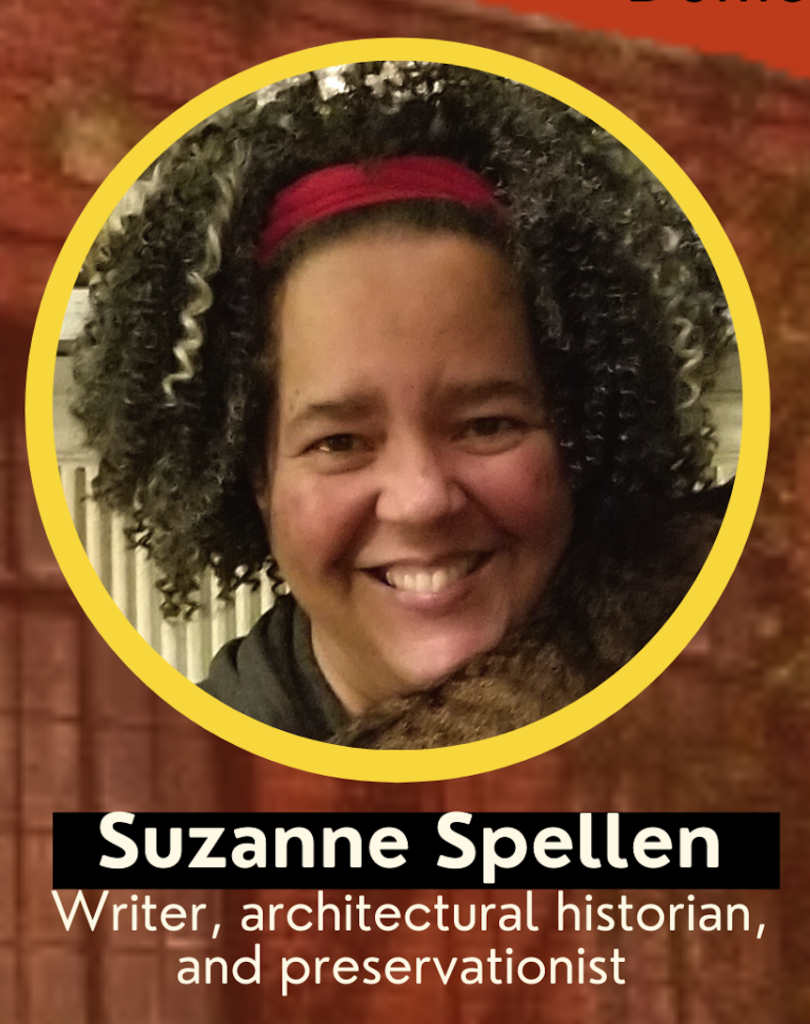 Suzanne Spellen grew up in the village of Gilbertsville in Otsego County, New York. She went to Yale, and then moved to NYC to pursue a career in opera and costume design. Living in Bedford Stuyvesant and Crown Heights North, Brooklyn inspired a new career in writing about old house restoration, and the history, architecture and people of Brooklyn. Spellen is a long-time board member of the Crown Heights North Association, Inc. (CNHA), which has worked tirelessly for landmark and National Register designation for the neighborhood.

Spellen is a columnist for the popular Brooklyn blog Brownstoner.com, her early work written under the pen name “Montrose Morris.” Her expertise on the architecture and history of Central Brooklyn has led to books, lectures, walking tours and research projects for many organizations, individuals and causes. In 2015, Spellen received the Historic Districts Council of New York’s “Grassroots Award” for her writing and historic preservation activities. Suzanne has also been a member of two teams receiving NY State Historic Preservation Awards. One in 2017, along with other CHNA board members and another in 2020 as part of the team writing the National Register designation report for all of NYC’s Carnegie Libraries.

Built with WordPress | Protected by Akismet | Powered by CUNY