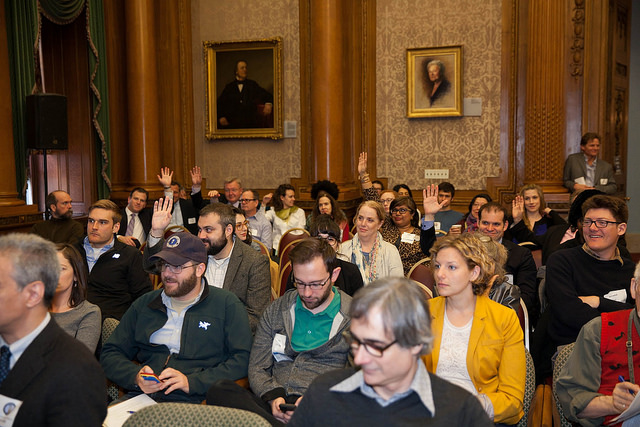 The BWRC Conference on “The Past, Present and Possible Future of Manufacturing Along the Brooklyn Waterfront” was a resounding success. Our best-attended conference yet examined the past, present, and future of industry and manufacturing on the Brooklyn waterfront, a topic which aroused considerable interest and generated some lively discussion.

After opening remarks by BWRC’s Richard Hanley and City Tech President Russ Hotzler, Brooklyn Deputy Borough President Diana Reyna and City Council Member Carlos Menchaca set the tone with their impassioned calls for a return to policies that would preserve and add jobs to the recently revitalized waterfront. Reyna was the first of several speakers who recalled their personal connections to Brooklyn’s manufacturing past; her memories of her mother’s experience as a garment worker reminded the audience that only a generation or two separates us from a time in which a thriving manufacturing economy was an important source of local employment.

Presentations by historians Julie Golia of the Brooklyn Historical Society and Aileen Chumard of the Brooklyn Navy Yard’s BLDG 92 also reminded us of Brooklyn’s rich industrial past and the ways in which waterfront history continues to shape the present moment. Pointing the way towards a possible future was Miquela Craytor, of the city’s Economic Development Corporation, who presented the city’s “Action Plan” for creating industrial and manufacturing jobs in the twenty-first century.

Adam Friedman, director of the Pratt Center for Community Development, argued for a “high value” approach to urban manufacturing, one that could be achieved by technology, design, innovation, and aesthetic quality. Others spoke to the challenges inherent in bringing about a waterfront manufacturing renaissance, including the limitations of current transportation infrastructure, the imperatives of market-based real estate development, and the necessity of considering the needs of existing waterfront communities.

The rest of the day was divided into three panel discussions, on “Locations, Infrastructure, and Resilience,” “Jobs and Workforce Development,” and “Supporting Manufacturers in an Urban Environment.” Here we heard perspectives from entrepreneurs and representatives of small businesses, as well as from community organizations, academics, and policymakers. Queens College’s Tarry Hum had the final word with her look at the convergence between real estate development and immigrant communities in neighborhoods like Sunset Park.

After the conclusion of the conference, a number of participants departed for a bus tour of the Brooklyn Navy Yard, a locus of revived waterfront tech-based industry that also provides a fascinating glimpse into Brooklyn’s industrial and maritime past.

Thanks to all who attended and to all who contributed to making this year’s conference such a success. We at BWRC look forward to an equally stimulating and thought-provoking public discussion next year.

(All Photos by Robin Michals/BWRC)