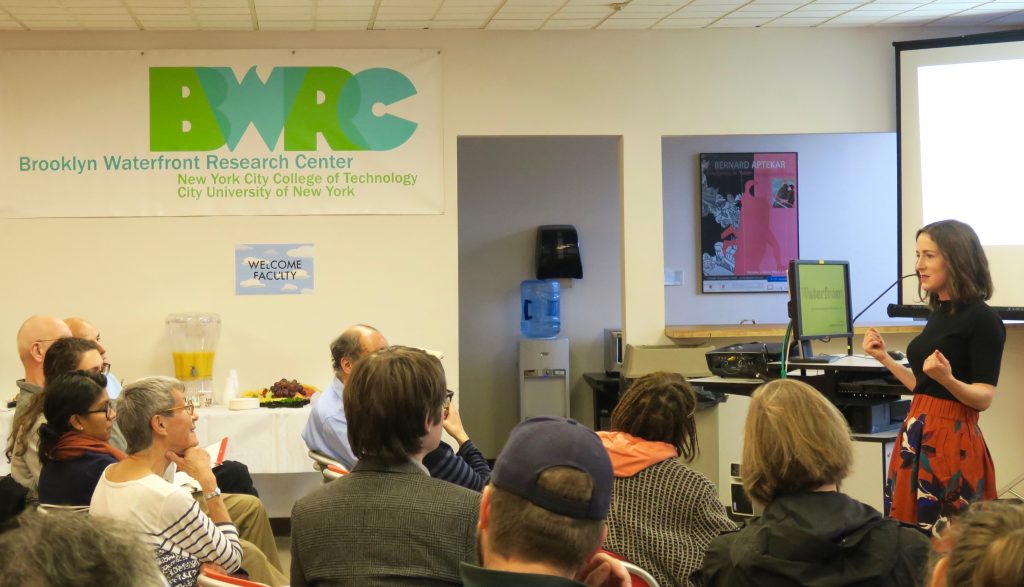 On November 18, the Brooklyn Waterfront Research Center held its final Breakfast Talk of 2016. The featured speaker was Julie Golia, Director of Public History at the Brooklyn Historical Society (BHS). Golia discussed BHS’s exciting new venture: a satellite location on the DUMBO waterfront, housed in the renewed Empire Stores. Set to open in December 2017, the museum will occupy 3,000 square feet on the second floor of the building. The inaugural exhibit, “Waterfront” will illuminate the legacy of the Brooklyn waterfront, and it will highlight the Empire Stores and Brooklyn Bridge Park. The talk was accompanied by dozens of slides that told the story of the waterfront and also revealed expertly researched artifacts and documents.

Overall, the museum will seek to uncover, research, and display a wide range of objects and documents collected from the entire Brooklyn waterfront, from Greenpoint to Jamaica Bay. Golia and her team explored the physical and social history of the Brooklyn waterfront in order to elicit diverse narratives about people, labor, and industry. The museum plans to bring these stories to life through innovative story-telling practices, hands-on displays, and digital interfaces. For example, through the use of artifacts and oral histories, the museum will highlight the role of slavery in the growth of the port, the contributions of women workers during WWII, and the influence of artists who flocked to the waterfront in the 1980s.

Due to the scope of the museum’s goals, the challenges of accurate historical research, the broad audiences the museum seeks, and the spatial and financial constraints, Golia described the project as both exhilarating and daunting. After the presentation, Golia solicited feedback and ideas from the audience, which led to a lively and productive discussion. At the end, Golia emphasized the importance of recognizing economic changes on the Brooklyn waterfront, and acknowledging both industrial and service workers.

With its proximity to Brooklyn Bridge Park, the museum will attract both local and international visitors. BHS will seek to provide meaningful narratives and experiences for diverse audiences.